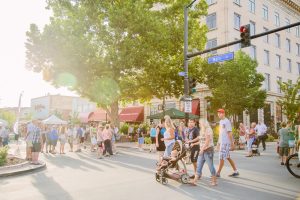 The United States Department of Agriculture has declared this week, August 7-13, 2016, as National Farmers Market Week. In recognition, Downtown Grand Junction, would like to highlight that the River City Real Estate Downtown Farmers Market is doing better than ever!

It’s been hopping in Downtown Grand Junction on Thursday evenings since the market began in June. Over the last three years the market has shifted from what many considered a street fair to an actual Farmers Market focused on our local farmers and food producers. With 21 Farmers and 23 Packaged and Prepared Food Vendors, the River City Real Estate Downtown Farmers Market is the place to stock up on the agricultural bounty that Western Colorado has to offer, including meat, eggs, and honey.

The River City Real Estate Downtown Farmers Market continues for six more weeks before we transition to the farmer-only Fall Produce Market on the 400 block of Colorado Ave. Join us on September 1st for Suicide Prevention Night, September 8th for First Responders Night including a moment of silence to honor those who lost their lives in the September 11th attacks, and on September 15, the final market, for the Men in Heels race to benefit the Latimer House. 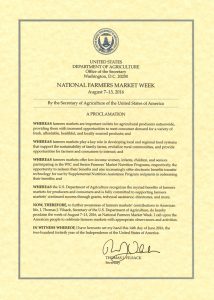