Get to know Downtown: Western Anglers 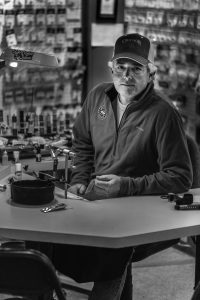 Every now and then we will be giving you a chance to get to know our local, Downtown business owners – your friends and neighbors – who make Downtown such a special place. We’d like to introduce you to Ned Mayers, owner of Western Anglers, 413 Main Street.

The Grand Valley’s one and only full-service fly shop opened its doors to Western Colorado in 1994. Originally owned by Jerry Schaffer, Ned Mayers chose to carry the torch of his long-time friend after years of being a loyal customer to Western Anglers.

Born in Altoona, Pennsylvania, later relocated to Littleton, Colorado at the age of three, Ned Mayers has always been naturally drawn to an angler’s lifestyle. Despite being the youngest of three and having a father that was more enthusiastic about golf clubs than fishing rods, Ned always found his way to water and the fish that inhabited it. He spent his younger years fishing away his free time. “The bug was always there, I just had to wait until I was old enough to do it on my own”, he says.

After graduating high school on the Front Range, Ned relocated to Durango, CO, where he attended Ft. Lewis College. Unsure of what to do, he tried a little bit of everything before graduating with a degree in English Communications. While attending college, Ned found himself roofing in the summer, when he wasn’t fishing, which later led to a twenty-plus year career in the construction industry. Following graduation, he continued to work for the same commercial roofing company which took him to Albuquerque, NM before he finally planted his roots here on the Western Slope in 1999. With the world class fishing access that it offered, there was no better place for he and his wife Collette to call home.

Upon moving to the Grand Valley Ned did what any sensible, passionate angler would do – he found the local go-to fly shop, Western Anglers. After frequenting Jerry’s shop for nearly 16 years, he was given the opportunity to purchase it. With facing burn-out in the construction industry, he was ready for a change of pace and didn’t require too much convincing to make the purchase. In 2015, Ned picked up the torch and continued weaving the legacy of Western Anglers.

On most any day you can walk in to the shop and find Ned tying flies, entertaining customers, working in his office, or talking shop with the regulars about where the fish are biting and what they’re biting. Not so much has changed for him aside from fishing less, teaching more, and living the Main-Street-America dream.

“For me, it’s about fishing. I don’t care how you do it. I still throw conventional gear. It’s just about being a well-rounded angler. I’d like to consider myself an angler, not just a fly fisherman!” – Ned Mayers