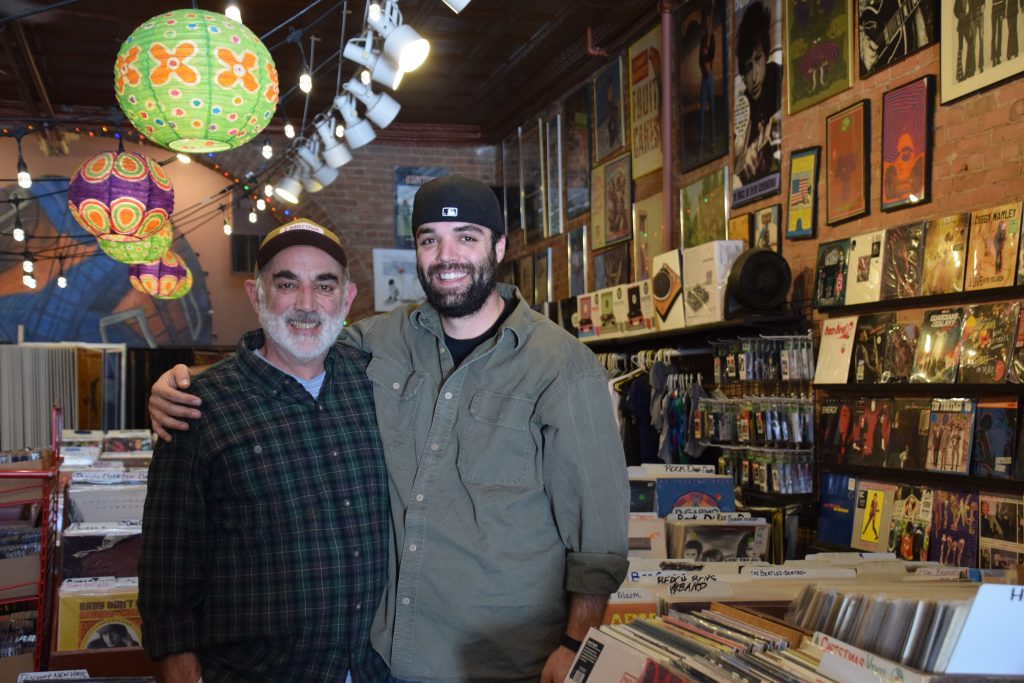 Every now and then we will be giving you a chance to get to know our local, Downtown business owners – your friends and neighbors – who make Downtown such a special place. We’d like to introduce you to Rock Cesario, owner of Triple Play Records, 530 Main Street.
Music has always been a passion! I bought my first record when I was 12 years old. In high school I drained my savings account buying LP’s in Downtown Grand Junction. I worked at Smokestack Records on 5th Street while I was going to college and the Budget Tapes and Records in the Mall after I dropped out. In 1988, after working as a salesman for KSTR Radio, my wife and I decided to open a record store. This was after being told not to do it by a banker, a lawyer and the director of the DTA at the time. It was also shortly after the “death of vinyl records” was predicted by many.
Triple Play Records opened in May of 1988 at 419 Main Street with only records, tapes, a few CD’s and my brothers and my collection of sports cards. In 1990 my son Matthew was born. This was a significant development in our history. I just didn’t know it at the time.
Being undercapitalized from the beginning, it was a struggle to keep the store going and support a family for 24 years, but we managed. In 1991 I had to choose between sports cards and vinyl because we couldn’t afford to stock both. It was an easy decision at the time and looking back it was the right one as well. Golf discs were added in 2001. Today we are a lifestyle store as well as a music store. We have so much more than music.
Both of our children helped out in the store while growing up. In fact, my daughter worked at a record store in Greely while she was going to school there. In 2007 at 16, Matt said “dad I think you could sell “hippie purses”, can we get some in and try? I gave him a budget of $300 and he ordered the purses. Two weeks later we needed more purses! It was then I became aware of his marketing prowess.
In 2009 after Matthew dropped out of college he said he wanted to help me in the store full-time to learn firsthand about running a business. He had helped on a very limited part time basis while he was growing up, but never full time. I remember his mother telling Matt “your dad doesn’t always get paid every month”. In 2013 Matthew told me he was going to go back to school here at CMU to study business. At that point I was considering selling and/or closing the store because I was getting weary of just getting by. Matt asked me to keep the store going until he graduated. So we made a deal that I would work and he would help out when he wasn’t in class. It was at this time we decided to target CMU students to increase that customer demographic, a move that has been very successful.
A partnership was then born and because of Matt’s input and effort our business has grown more than I could ever have imagined. He has a sense of marketing and promoting our business that I do not possess. Through Matt we found a friendly bank that would help us grow instead of hindering our growth. He also has the perfect personality for retail sales and he knows what our customers want and how to serve them. We invested in our inventory and turned the marketing over to Matthew. Matt graduated from CMU with a degree in entrepreneurship in 2016. To say that I have learned a lot from him is an understatement.
I have met some amazing folks, some famous, and made some lifetime friends through Triple Play Records. Most special of all is the chance to work side by side with my son for the past several years as we head towards our 30th anniversary in May. That is what’s priceless to me!