Get to Know Downtown : Mesa Jewelers 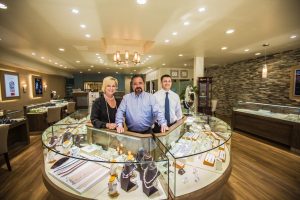 John Kelly, the owner of Mesa Jewelers located at 444 Main St. in Grand Junction, CO, was born in 1957 in Pittsburg Pennsylvania. His father worked as a general manager for Armour Meats and his mother remained at home to raise their five children. It wasn’t until 1982 that he relocated to Grand Junction.

After graduating from Keystone Oaks Highschool, John took the liberty to start traveling. Briefly, he lived in New Jersey as well as Florida before making his way back to Pittsburg at nineteen years young. Around Christmas 1976, his sister offered him an opportunity to come work with her at the jewelry where she was employed. They had recently lost an employee leaving them shorthanded. Never having had experience with the jewelry business, John was reluctant to say the least. “There was no way I was going to work in that jewelry store!”, he said. Despite his resistance, his sister still managed to strong-arm him in to coming to her rescue.

Unbeknownst to him, what he insisted would be a brief interlude turned in to a pursuit of a lifetime and ultimately his legacy in the Grand Valley. John quickly climbed the industry latter. At twenty years old, he was the manager at the store he swore he wouldn’t work at. In 1982, he was offered an opportunity through the store chain he worked for to open a store in western Colorado. Having a fever for travel and a love for skiing, the answer was an easy ‘yes’.

After spending five years in the valley, John wed a woman he had hired and fired all in the name of love, Josephine Kelly. The two went on to have two children, Chris and Jenny. In 1991, John took the reins of his destiny and opened Mesa Jewelers in the Mesa Mall where it had remained up until September of 2018. With his wife to his right and his son to his left John is still in hot pursuit of the legacy he intends to leave his next generation.