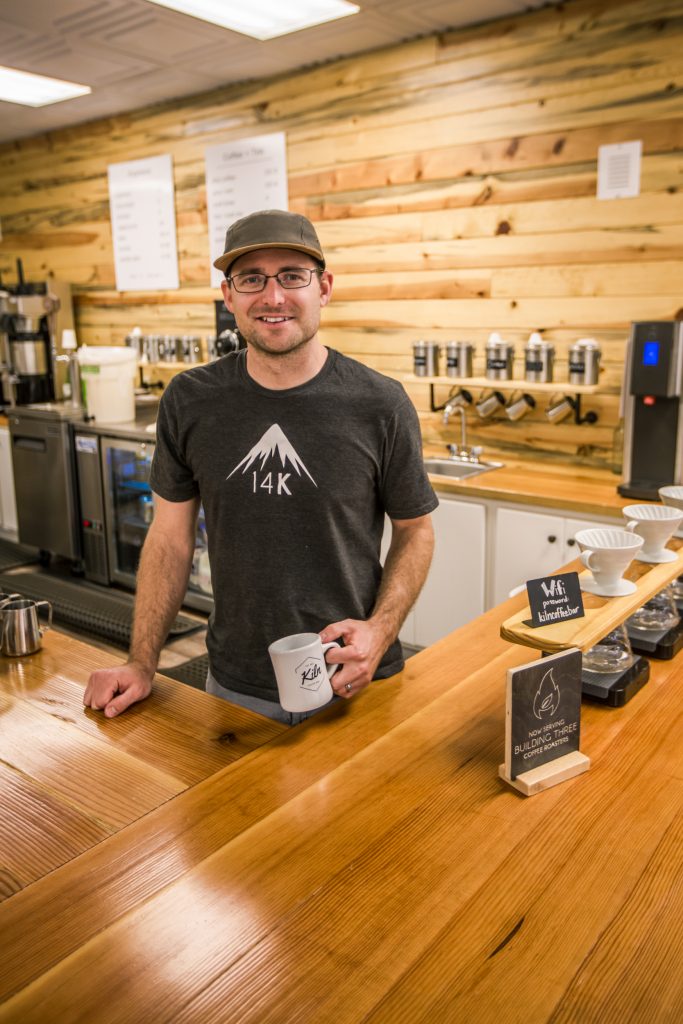 Every now and then we will be giving you a chance to get to know our local, Downtown business owners – your friends and neighbors – who make Downtown such a special place. We’d like to introduce you to David Foster, owner of Kiln Coffee Bar, located at 326 Main Street.

David Foster was born and raised in Hemet, California along with his identical twin brother, Johnathan. Together, this dynamic duo owns and operate Kiln Coffee Bar in Downtown Grand Junction, CO. Despite their separate life experiences, they have both mutually shared the dream of owning a coffee shop together from a young age.

Following high school graduation, David went on to attend Vanguard University in Costa Mesa, California where he graduated with a degree in Theology. Unsure of how he would apply his degree he spent a year as an intern at a church only to find that it wasn’t quite as fulfilling as he had initially hoped.

Despite not finding a perfect fit for his degree, David found a different means of applying his freshly acquired skill set. Theology for him wasn’t just a matter of understanding religion, it was a way for him to understand his fellow people beyond the superficiality of day-to-day interactions. With college behind him, a degree in-hand, and the world at his fingertips, he took to the road, sky, and sea.

Unbound and free to roam, David set out to see the world for how it was, not how it was portrayed through the various veins of media. He spent three-months traveling along he Mediterranean Sea and at one point spent six-months in Indonesia teaching English to the locals. As for his travels state side, he’s lived up and down the coast of California managing coffee shops as well as slinging coffee beans and smiles. Most recently, prior to calling the Grand Valley home, he lived in Davis, California. There, he met his now-wife, Meghan.

Wanting a change of pace from California, David and Meghan looked east for a new home. Together they planned a trip with Nashville in mind for their destination in hopes of finding a community that had access to the outdoors as well a community they could easily blend in with. Along the way, they mutually fell in love with our beautiful valley and since have called it home.

With having a background in managing coffee shops and his inherent love for people as well as community, it was natural for David to start a coffee shop with his brother. Their approach is less focused on revenue and vanity and more aimed at how they impact their community. David says, “what and incredible opportunity to positively impact the community every day I come into work”.