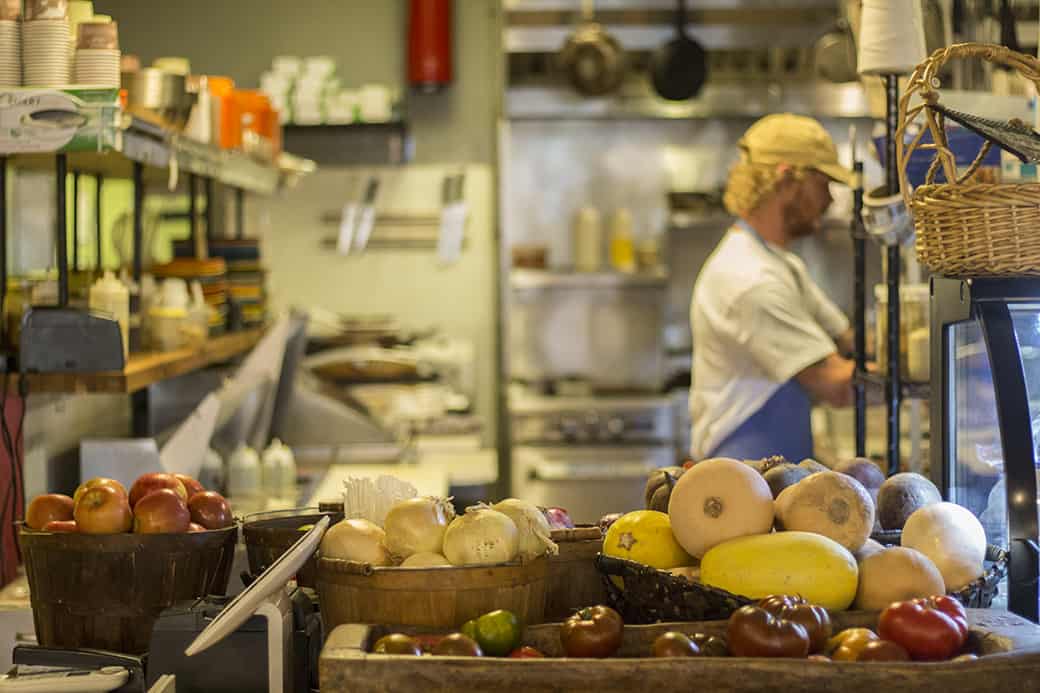 During the summer months, Downtown Grand Junction booms with life. Nestled by some of the world’s most unique land forms, Main St. is the heart of Grand Junction- bringing people from all across the Grand Valley to enjoy local art, music and shopping. But arguably, the most popular Downtown attraction is the food.

With nearly 30 local restaurants and 13 weeks of Markets during the summer, it’s no secret that Downtown, and the people who visit, value good food. Restaurant owners and crop growers work tirelessly to support Downtown with clean and healthy ingredients, so that your tomato and basil salad or peach pizza taste delicious each and every time.

The relationship between Downtown restaurants and local farms is co-dependent and supports more than just cravings. Bigger components are at play behind the scenes, and it’s the “growing, selling, cooking, serving” cycle that greatly benefits the local economy and brings the community closer together.

Fresh vegetables sit at the front counter of Cafe Sol, giving customers a look at their meal’s ingredients .

Café Sol is known for their fresh, locally sourced ingredients. Owner/ salad and panini guru, Nick Santos gets his produce from a variety of farms including Field to Fork, Blaine’s Tomatoes, Produce Peddlers and Back Porch Produce.

“The biggest benefit of sourcing locally is just the quality of the produce itself. When it’s picked and delivered within two or three days, and it ends up on a customer’s plate the next day, you can’t beat the freshness,” Santos said. “There’s a huge local food movement and it’s good for our style of café. People want to see local produce up front, and they want to see it on their plates.” 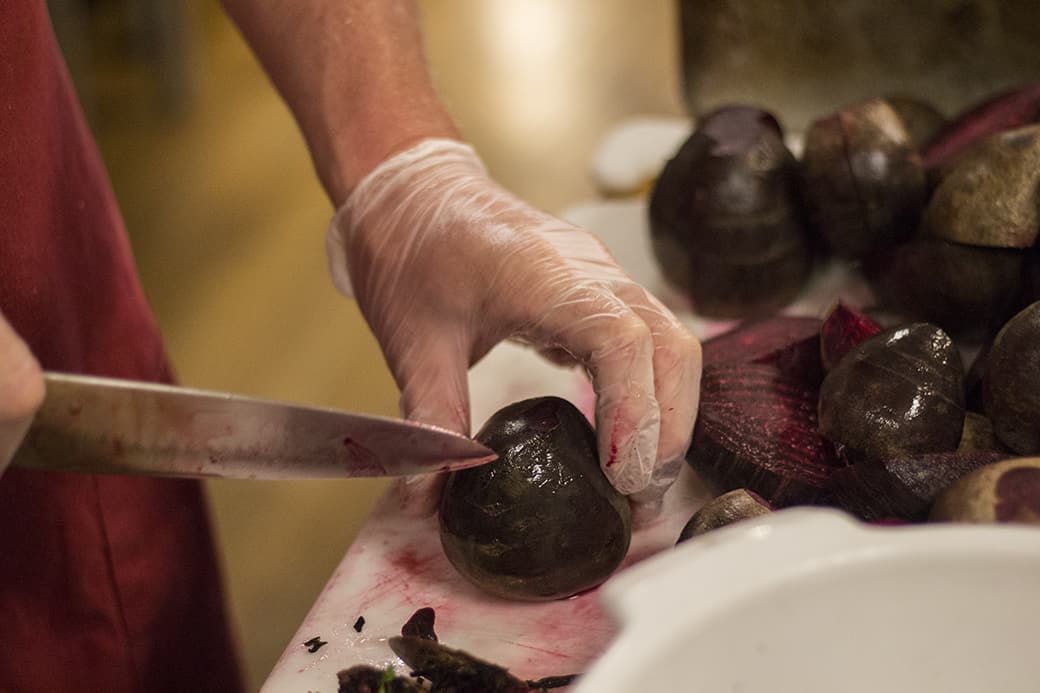 Local food has become “trendy” in just recent years. While markets are still stocked with processed and mass-produced food, many communities have begun to understand the value of local food.

It’s this shift in culture which allows locally sourced restaurants like Café Sol to prosper, and Santos isn’t the only business owner to invest locally.

Pablo’s Pizza, owned and operated by Paul Knaysi, is a Downtown GJ favorite. Anyone who’s ever visited can tell you the Pablo’s crew isn’t shy when it comes to fresh and creative ingredient combinations. Select a pizza from their menu or take a walk on the wild side and try their pizza of the week (August is prime for weekly peach pizzas).

“We love featuring fresh, local produce on our pizza of the 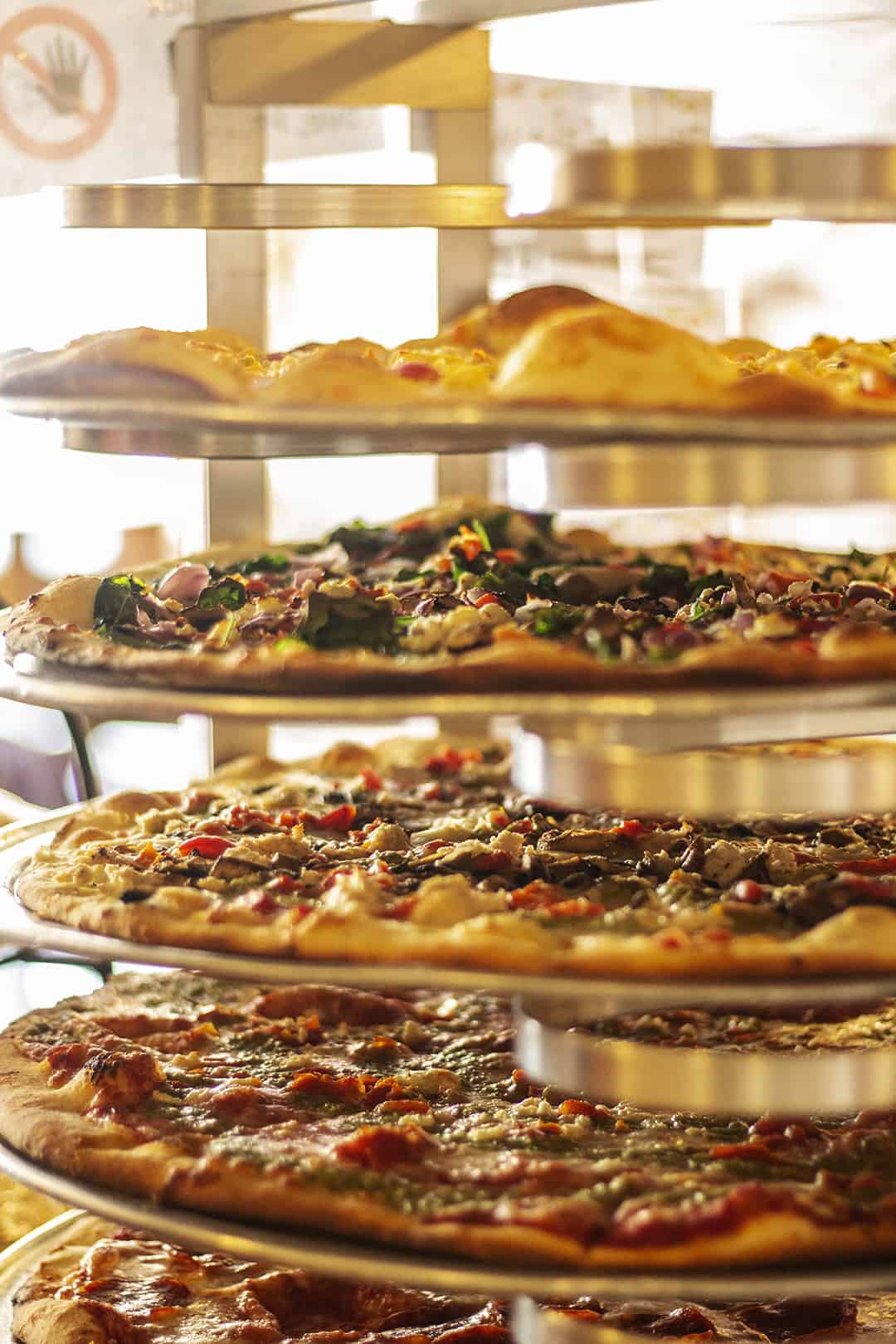 Pablo’s Pizza is a Downtown favorite, offering a variety of locally sourced toppings.

week, but we also incorporate it into our salads and pizza toppings,” Knaysi said. “The produce is more expensive, but we can tell the difference, as can our customers, with the quality and flavor.  We feel that we are investing in our community when we purchase local.”

“Jessie from Field to Fork was one of our earliest employees,” Knaysi said. “When she moved back into town to start her farm with Scott, we wanted to support them any way we could, so we began purchasing produce from them.” 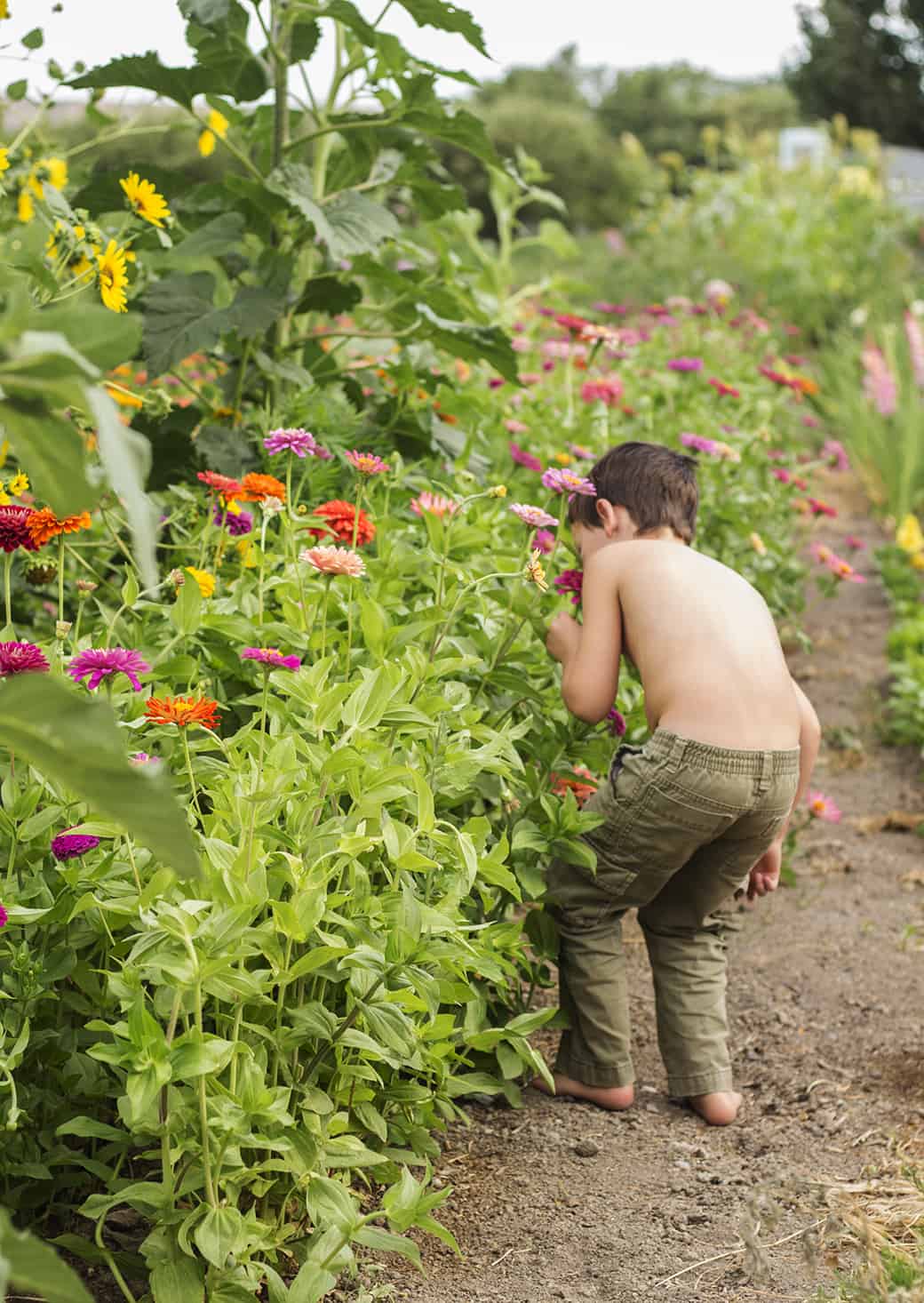 Scott and Jess’s son, Clive, stops to smell some flowers growing on the farm.

Owners Scott and Jess liveon the farm with their 7-year-old son, Clive. Scott has a degree in horticulture, and Jess has a degree in marketing. Together, they share a passion for cooking and healthy living. Growing up, Jess spent summers eating fresh fruits and vegetables from her neighbor’s gardens and “dehydrating so, so much fruit.” Her childhood, as well as her mother’s love for cooking, was a strong base for opening a farm in her adult years.

Field to Fork owner, Scott, walks through a greenhouse on the farm.

“I worked for Paul at Pablo’s about 18 years ago while I was going through college, and he was the first person to really teach me balance and cooking and not overloading something with too much flavor,” Jess said. “To think our relationship has grown like it has… they’ve watched me start a family and now grow this farm. They’re so much more than just a customer. They’re like our family.”

With support from local restaurants, Field to Fork has been able to expand and try new things. They’ve recently become organic certified. Between the fertilizers used and composting the farm’s waste, the couple works hard to ensure quality produce.

Although the farm follows rules and regulations to maintain their organic certification, Scott and Jess have a “no rules, anything goes” attitude when it comes to experimenting with crops.

“Every year, every season, every day, we’re evolving and developing new ideas. We’re not stuck in our ways at all. We’re constantly trying new varieties, but we never know what’s going to happen,” Jess said. “It’s very risky, but having people like Paul at Pablo’s and Nick at Café Sol allows us to experiment. Knowing they have our backs as we go along is really amazing.”

Another huge supporter of Field to Fork is Downtown restaurant 626 on Rood, owned by 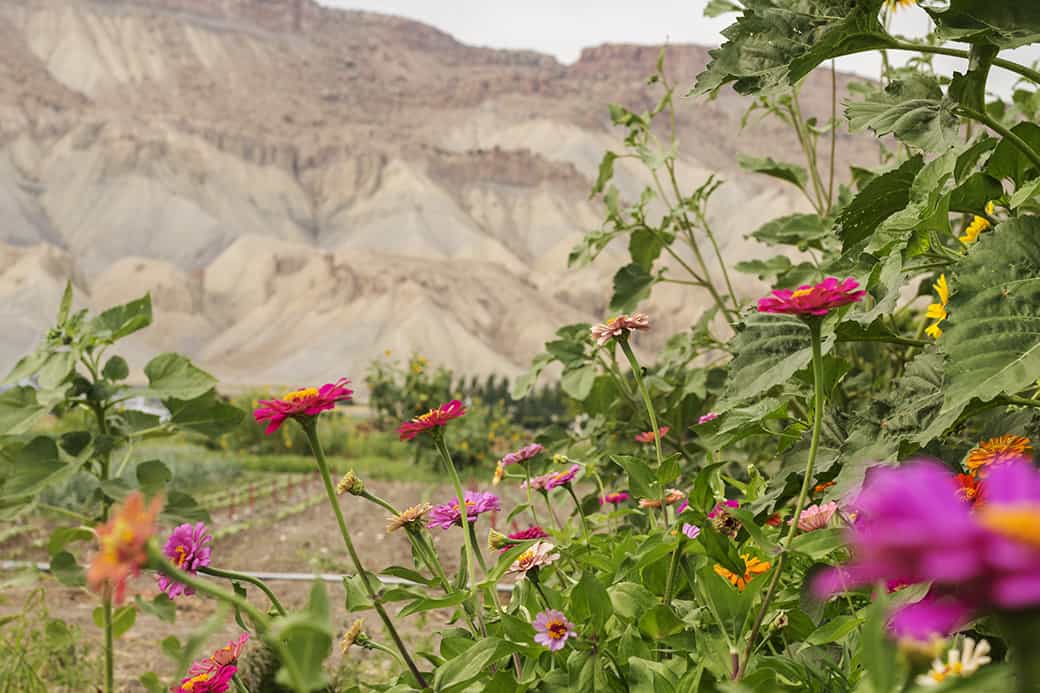 Field to Fork farm is situated near Mt.Garfield in Palisade, CO.

“Theo and Brenda are huge supporters of our farm as well. They’re our more high-end restaurant that we work with here locally who want all the little things,” Jess said. “They’ve been big on wanting some really nice, more expensive ingredients, and it’s helped us develop those nicer crops.”

Theo and Brenda began working with Field to Fork about six years ago after they relocated from Fort Collins. The pair were in search of local produce for their restaurant and were shocked that local GJ farmers were traveling to Aspen and Vail to sell their produce. They told farmers, “we’ll buy everything.” They’ve had a relationship with Scott and Jess ever since.

“We see them as a mutual benefactor. They grow amazing stuff, and that gives us amazing ingredients to create for our guests,” Theo said. “I think a lot of people under-appreciate the commitment that farmers such as Scott and Jess have. There’s something to be said about keeping a large diversity in the crops you grow, and the Scott’s and Jess’s of the world are doing that.” 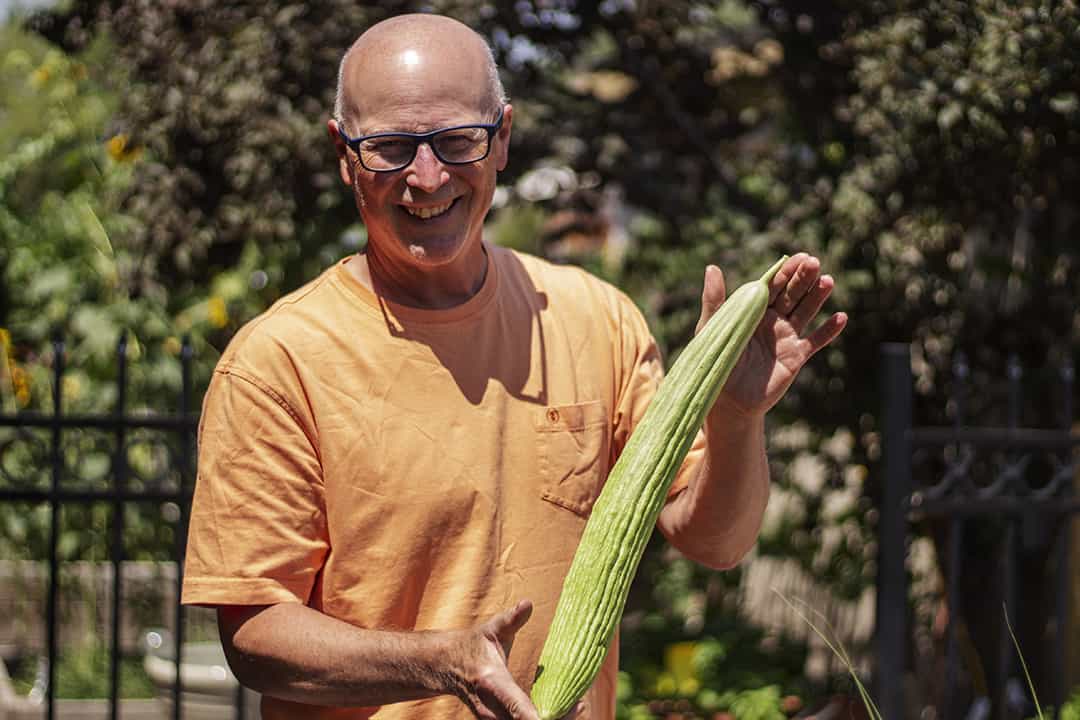 626 on Rood co-owner and head-chef, Theo, showcases produce from the restaurant’s on-site garden.

Brenda and Theo try to “complete the cycle” after receiving organic certified ingredients. The pair composts everything, and that compost gives back to their own garden right outside the restaurant. By purchasing starter seeds from Field to Fork, ingredients such as herbs, peppers and edible flowers are picked during shifts and served just minutes later.

“We just hope that more people understand the importance and value of buying local. Please, buy from these farmers, and show

up to these markets,” Brenda said. “It costs more, but in the long run it costs less. Your health will thank you.”

Health isn’t the only persuading factor. 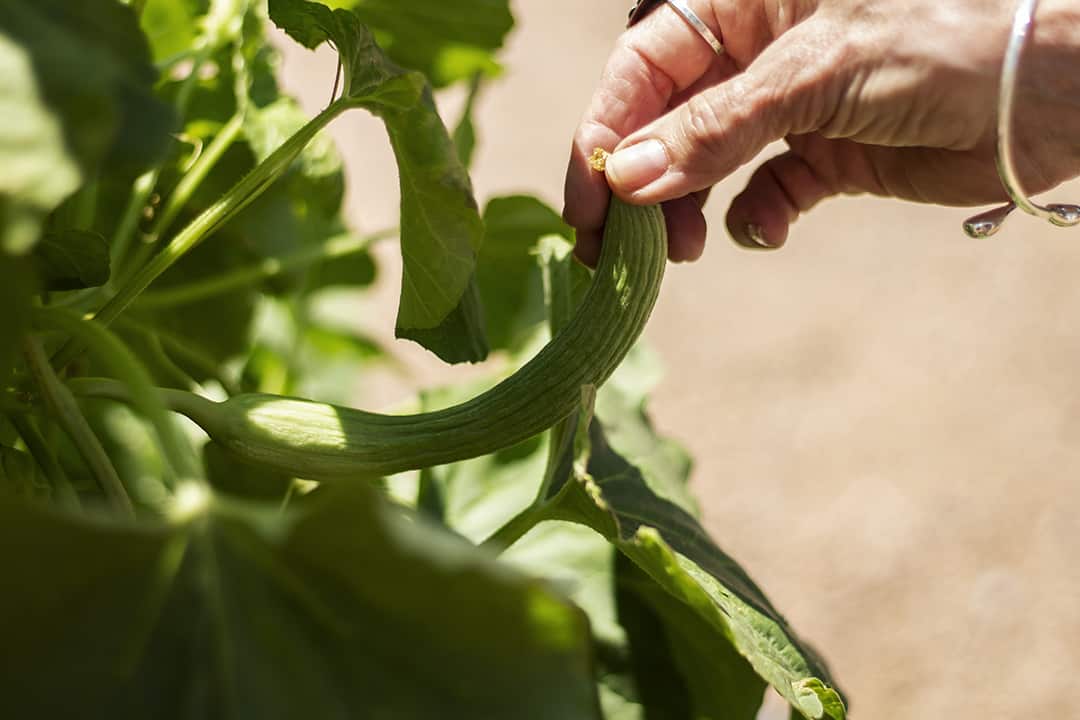 “The way we think about it is, for every $100 we spend locally with a Scott and Jess, that ends up being $800- $900 in economic impact for the community,” Brenda said. “If that’s not enough to get people on board with local food, I don’t know what is.”